China offered to help in the rebuilding of different infrastructure in Chimanimani town, Zimbabwe after Cyclone Idai.

Chinese Government has offered to rebuild infrastructure in Chimanimani town, Zimbabwe. This is after the town was hit with Cyclone Idai that swept through the country during last weekend disaster.

The Cyclone Idai disaster which claimed at least 300 lives saw roads, bridges, schools and clinics destroyed. During a ceremony held for victims of the cyclone, Chinese deputy ambassador to Zimbabwe Mr Zhao Baogang said China has funds that the country will need. 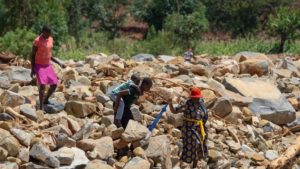 Zhao Baogang said ”We will be very willing to join you in the reconstruction in Chimanimani. Houses, clinics, schools were destroyed and we can rebuild it if we work together.”

According to him, China has funds under the the framework of the Forum on China Africa Cooperation (FOCAC). He said the Government can write to us and  make a request for support. This funds worth $60 billion was announced during the African Summit held last year in China.

Zhao Baogang stated that the Government, through the relevant ministries, should propose projects. This project should be for school, clinic that should benefit residents that were affected by the Cyclone Idai.