Madina-Adenta Highway set for completion by the end of june according to Ghana Minister for Road and Highway.

Construction of Madina-Adenta highway is set for completion at the end of June. This was announced during an inspection by the Minister of Roads and Highways, Kwasi Amoako-Atta.

The Minister express satisfaction at the quality of work on the project so far. He also urge the public to use the facility rather than putting their lives in danger by crossing the road, which had claimed many lives.

Kwasi Amoako-Atta said the contractor will perform landscaping and the paving even do it was not part of the contract. While, light will be provided along the entire stretch of the footbridges to ensure the safety of users. 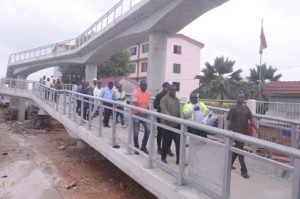 He also charge the people to enforce their bye-laws and stop advertisers from defacing the footbridges. According to him a law will soon be promulgated to make the defacing of public monuments a crime.

The incident that made the Government look into the road was the death of a female student of WASS. The girl died on the spot after she was knocked down and killed by a taxi cab in front of the school.

This made the government re-award the contract in November last year, following violent demonstrations by Adenta residents.