President Macron has kick-off his 4-days tour in Africa. He arrived Djibouti last night and meet with President Ismail Omar Guelleh. While in the country, Macron will also visit France’s largest military contingent based in Africa with its 1,450 troops. Macron will be the second French president to travel to Djibouti in 20 years, after Nicolas Sarkozy in 2010. 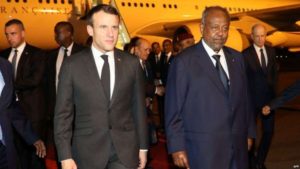 On his next stop, is Ethiopia. The president who arrive Ethiopia today visited the Rock-Hewn churches of Lalibela. This is after the Church was declared a UNESCO world Heritage site in 1978. This site consists of 11 cave churches, constructed around the 13th century, carved into the rock of the Ethiopian Highlands. 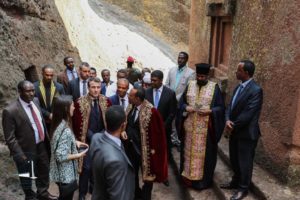 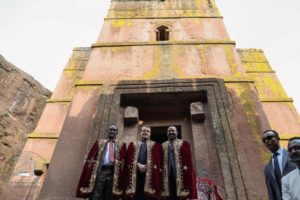 Meanwhile, PM Abiy Ahmed secured a support pledge from the French Government in Oct 2018 that would go toward restoration of the Churches during his visit to France last year.

The President will also meet French business leaders as this visit will aims to facilitate economic partnership with Addis Ababa. He will also visit the Defence and security cooperation.

On his Kenya visit, President Macron will chair the One Planet Summit with Kenya President Uhuru Kenyatta. Upon arrival, He will visit Nairobi’s central railway station, where France intends to work on a rapid train service.

The two nation will also conduct discussions on bilateral matters, including trade, manufacturing, infrastructure support, and peace and security. President Macron will end his tour with a meeting with students at the University of Nairobi.