The Qatari group arrived in Mogadishu, the capital, on Monday and is led by Deputy Prime Minister and Minister of Foreign Affairs H E Sheikh Mohamed bin Abdulrahman Al Thani

In a press conference following the meeting, the Ministry of Transportation and Communications said Qatar Ports Management Company will enter an investment partnership with Somalia to build the port, without giving out much details.

ADVANTAGES OF THE HOBYO PORT CONSTRUCTION? 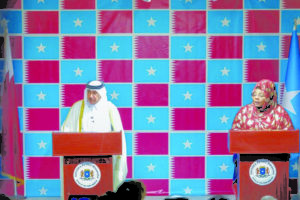 According to the Minister of Ports and Maritime Transport of Somalia, Maryan Aweys Jama, Qatar’s investment in Hobyo Port will develop and strengthen the relations between the two countries.

Hobyo is an important Somali port owing to its proximity to the Bab-el-Mandeb Strait, which is one of the most important sea crossing points in the world, with the potential for access to international markets.

Aweys Jama stressed that the launch of the Hobyo Port construction project will create jobs for citizens and contribute to the country’s economy.

The Minister of Transport and Communications, H E Jassim added that the investment will also open new horizons for cooperation between the two countries and bolster Somalia’s commercial ties to new markets in Africa.